It was just about three years ago that our family life took quite an unexpected turn. For a week or two I had just been feeling off, my chest had been hurting, and it was starting to make me nervous. It’s hard not to let your imagination run wild when it comes to health stuff, and I was WebMDing my way into a full fledged freak out. After church one Sunday, while sitting in the Safeway parking lot, I admitted my fears to my husband and described my symptoms. As soon as I finished listing all of the possible things that the Internet said could be wrong with me, he blurted out “you’re pregnant!” We had gone through a hard time getting pregnant after our oldest son was born, and it took us nearly two years of trying, tests, and finally one round of a low dose fertility drug to bring about the twins. Because of that, an unplanned pregnancy had never crossed my mind. Just that morning I had told people at church that we were for sure done having babies. Sitting there in the car with our three very loud, and increasingly impatient, hungry boys, my mind rebelled at such an overwhelming thought as adding another one.

Franz had to bribe me with a doughnut to take a pregnancy test. I mostly did it just to prove him wrong. He wasn’t. I have literally never seen a pregnancy test turn positive that quickly, I hadn’t even set it back down on the counter when that double line popped up! I bellowed at him from the bathroom, and said a few choice words about this development. He couldn’t stop grinning like a fool.

How could this have happened?? I wailed. Obviously, we all know how this happens, but after all the struggle we went through with the twins, it just felt like a sucker punch to be surprised by such a thing! It all boiled down to one week, ONE, of first missing the pharmacy delivery driver and then forgetting to just drive to the pharmacy to pick up my medicine. It felt ludicrous.

Sometime around New Year’s we had talked about trying for a fourth. For about a day I was on board, and then panic set in. “Three is more than enough for me to deal with,” I told my husband. “I can’t consciously make this decision to have another baby, I think we just need to be done. If God wants us to have another baby He’s just going to have to make it happen on His own.” Side note: Never challenge God.

Unlike our two other pregnancies, when I had either called or texted everyone in our acquaintance to share the good news, I couldn’t bring myself to tell anyone, not even family. It felt heavy, and instead of joy, I only felt fear and anxiety. I was also so not ready to hear other people’s thoughts. ‘You do know what causes that right?’ ‘But you said you were done.’ In fact, for the first person to know my new secret, I purposely picked a friend I knew would have complete, unchecked joy for me. No questioning if I was alright with it, no sarcastic quips, just total joy. I needed someone else to feel it for me, because I was far from it.

In addition to everything, at that time, a good friend was struggling to get pregnant. So many tests and even a surgery, and she was smack in the middle of praying and hoping it would result in their first baby. And here I was, little miss irresponsible pill taker, who accidentally found herself in the situation that would have made this friend feel over the moon if it were her. I felt guilt that it was me and not her, and then I felt guilt that I wasn’t thankful for this amazing little miracle of my own. Her sincere joy and delight at my news was humbling for me in many ways.

Over the course of a week I slowly shared our news with our family and other friends. Each person I told helped me ease into the idea of this new thing, but it still took me nearly half of my pregnancy to even feel connected to what was happening. I started praying that God would give me peace and joy, and somewhere in there, I began to believe that this was all going to be ok, even when everything about this new baby was unexpected. Starting with the fact that she was a girl! Even the week leading up to her birth was full of unexpected twists (I wrote about that adventure here). It was all teaching me bit by bit, how to trust that God wasn’t playing some joke on me, and He had a purpose and a plan for our family and this new member of it. 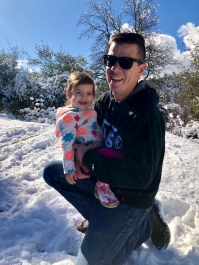 This same time, about 31 years ago, another mother was learning to trust in God’s plan for her baby. However this baby was never to be known this side of Heaven. The mother watched as they took the small, still bundle away, her heart shattering into pieces, questioning why this was happening. Her husband was beside her, quiet in his devastation. This young couple was in the midst of dealing with a struggling marriage, substance abuse issues, and a strong willed two year old. Life was complicated. But this heart break took them somewhere they didn’t expect. Running back to God. In the midst of their grief, they decided to name this baby girl Hope, as a symbol of the hope they were finding in the One who had called her home.

Almost a year after our daughter was born, my dad admitted to me that he had struggled with fear during my pregnancy. As soon as he knew we were going to name her Hope, all of the memories of that pain were right back in the forefront, and he was terrified of it happening again. Seeing this little Hope, how she looks like such a mix of me and my younger sister Caitlin, has been like a sweet balm to that scar that will never entirely go away. 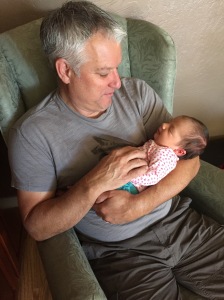 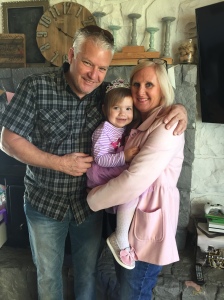 It’s unfathomable to me now that I wasn’t fighting like heck from that first hypothetical conversation at New Year’s to have this precious girl in our family. That she was given to me when I wasn’t even looking for her is beyond my comprehension, and something I will forever be thankful for. In that same way, my parents were obviously not expecting to walk through such a painful time, but they have said numerous times, if they hadn’t lost Hope, they would never have met my sister Caitlin. They may never have gone back to church like they did, they might never have found that path together that brought them back to a place of faith, and two little girls from China and Taiwan may not have found their way into our family. Plans change, but He is forever faithful. May we always have hope in Him.

8 thoughts on “Holding On to Hope”