Last night my little crew and I took advantage of the beautiful weather we are having, and went outside to play. Just being outside together has a magical component to it. They fight less, my stress level lowers considerably, and we have had many sweet and easy conversations at our swing set. After a while of very sweetly pushing his baby sister in her swing, Steven shyly asked if we could go play basketball. Mom truth moment, I didn’t really want to. I was feeling a little lazy in the warm sun, and I was enjoying not moving too fast. Something in his tone though, something that said he knew he might get shot down, but it was worth asking anyways caused me to say yes. His face lit up, “yes! C’mon brothers! Mom said we could play basketball!” Sometimes it really is that simple to make a kid’s day. We all trooped out of the yard, and onto the shaded pavement, where our {much lower than it should be} hoop usually sits unnoticed.
At first it was just Steven and I shooting baskets, he likes to try to block my shots, and I take great satisfaction when I make them anyways. Yes, I am that mom. After a while of watching us, Ryan decided he wanted to try to make a basket. I was a little surprised, he isn’t usually the one who wants to play since, being a perfectionist, he doesn’t like it if he can’t get it right the first time. I lined him up, showed him how to hold the ball, reminded him to aim for the square on the backboard, and stepped back. His first shot was a miss. Outwardly I smiled and cheered, saying it was a good first try, but mentally I braced myself for the folded arms and hanging head accompanied by a whined complaint.  But it didn’t come. Instead he just smiled at me, and took the ball his big brother handed him, with the encouraging “that was good Ryan, try again.” He lined himself up, took a breath, and shot again. Swish. You would have thought it was the winning point in a high stakes game the way his brothers started jumping and cheering, and I was clapping like a fool. He was grinning from ear to ear, so proud of himself for doing it. He is almost as tall as the hoop, it’s been lowered so much for their benefit, but it was precious. After that KC wanted to join, and I just stood and watched the three of them encouraging each other, laughing, and chasing the ball when someone was a little overzealous in their shot.

A little known fact about me, I actually played basketball in elementary school for a few years. I was always on the B team though, and for good reason. I wasn’t good. Part of it was I was absolutely terrified of doing things wrong, so the fact that I even went out for the team is surprising…although now that I think of it, I don’t remember anyone in our class NOT playing so maybe it was mandatory. That would explain my sudden burst of athleticism. Anyways, for whatever reason I ended up on a court, I did in fact learn to play the game. Not well, but I tried. Sort of. I remember once, my coach got my attention during a game and asked me to call a time out. I had never done that before, and I was immediately petrified I would do it wrong, so even after making eye contact and nodding in response, I still kept going and didn’t call it. He got another teammate to do it, and we all huddled up. He looked at me in exasperation and asked, “why didn’t you call it?!” At the time I wasn’t able to process my feelings well enough to understand why I didn’t (that necessary life skill came much later for me), but looking back, it was because I was just plain scared. Everyone would be looking at me, what if I did it wrong? What if they all stared at me and there I would be looking like an idiot in front of my friends and family? I know, I know. The unwarranted angst of a 6thgrade girl. But for me, that was just my reality. The way I perceived myself was that I was a B lister, and B listers didn’t do high profile things. EVER. 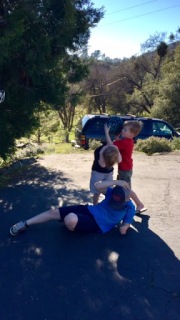 That mindset stayed with me for a very long time. In fact, I would say only in recent years have I finally stopped viewing myself as the second string in most situations. Ministry opportunities, jobs, relationships. Friendships in particular. The other day, I seriously almost held back from posting something on a friend’s timeline. My first thought was, she doesn’t want someone like me posting stuff, it will probably just annoy her….and then I caught myself. This is my FRIEND. Someone who I’ve had deep conversations with, and has known me for literally 25 years. Why wouldn’t she want to log on to find I had thought of her and shared something? So I laughed at myself, and hit post. Over the years I’ve done similar things like this too many times to count, the difference being, I didn’t catch myself. I didn’t logically process through it and realize the lie I was buying into. How many times have I lost an opportunity simply because I believed I was a B lister, and B listers don’t do — insert situation here—.

It’s a fairly depressing way to live to be quite honest. At some point, thankfully, I looked up and realized I was sitting alone on a bench that nobody was telling me I had to sit on. Getting up and starting to approach situations like I deserved to be there was monumental for me. Suddenly I was doing things like talking to intimidatingly “cool” moms on field trips, signing up to be on leadership for a ministry, agreeing to go on a girls trip that would have previously sent me into an anxiety attack. Life changers people. Realizing how much I actually had to offer to others was almost astounding to me. I think it’s easy for us to confine ourselves to thinking we always have to be one thing for our whole lives, but what a waste that is to a world that needs every aspect of our uniqueness!
To be clear, I am by no means implying that being on the B Team in elementary school caused me to have a stigma the rest of my life. Believe me, I never had any doubts I was a B Team basketball player. As I had no real love for the sport, I had no motivation to change that placement. Trust me, they made the right call. However I do think that much of our childhood is spent trying to figure out where we fit, what we have to give to others, so that by the time we are adults we can start giving everything we have. Some of us however miss that window, and it takes us a little longer than others. Watching my little people play so freely last night made my heart swell. The thought of any of them going through their lives missing out on so much from a misguided image of themselves makes me want to cry, but we each have our own path to follow. I won’t be able to keep them from being hurt or losing, but I can make it my goal to teach them that life is best lived off the bench, and (get ready for some cheeseball), the B Team is just a state of mind.

“Since this is the kind of life we have chosen, the life of the Spirit, let us make sure that we do not just hold it as an idea in our heads or a sentiment in our hearts, but work out its implications in every detail of our lives. That means we will not compare ourselves with each other as if one of us were better and another worse. We have far more interesting things to do with our lives. Each of us is an original.” Galatians 5:25-26 The Message