This past weekend our baby girl turned one. I’m still having a hard time wrapping my mind around how fast this year has gone! There have been so many words swirling around in my head to describe the impact she has had on our family, and myself especially. Her name itself encompasses so much. Hope. In so many ways she has brought hope to our family. Prior to her coming I don’t think I would have said that we were struggling, but if I’m being honest, we were. Three wild, ever curious and hungry boys can take its toll, and I frequently felt like I was drowning in the task. To say I was terrified when I found out we were going to add to the chaos would be an understatement. Four?? Four kids??? Seriously Lord??

The weeks and months leading up to her arrival were definitely a growing experience for me (physically and literally, ha). Nothing went as planned, nor as expected. Which was actually fitting, considering she hadn’t exactly been planned either (ahem).

It took a while for me to stop staring at people in confusion when they offered congratulations. Oh right, I’m having a baby. The day we found out it was a girl I thought Franz was going to explode with excitement. As happy as he was with his boys, he had always longed for a baby girl. Her brothers were thrilled, and they proudly told everybody they were getting a baby sister. This would be my third c-section, so there wasn’t much mystery about when she would arrive. We circled it on the calendar, and they counted down the days.

The week of her delivery we were met with quite a few “fun” surprises. First, my Walmart account was hacked, and we narrowly escaped paying for a rather expensive computer set up that was being rushed shipped somewhere to the mid-west. Sorry Mr. Hacker. Monday, Kasey had a random fever, so we kept both twins home from preschool just in case. Tuesday, I was at my parents’ house for dinner when Franz called to tell me he had been hit by a deer on his way home. Hit by a deer. (Gilmore Girl’s reference anyone?) Fantastic. Wednesday, the day before this new little person was set to arrive, I noticed Kasey had random red spots on his face and hands. After a whirlwind drop off for Ryan at preschool, a hurried appointment scheduled, and the half an hour driven to our family doctor in Murphys, it took him less than five minutes to tell me we were dealing with Hand Foot and Mouth Disease. That random fever had been the first stage. Goody.

On the drive home I had to pull over because my emotional, diseased child was throwing a fit of epic proportions over having to miss school. We both cried right there on the side of Parrott’s Ferry Road. I eventually pulled myself together enough to drive to my parent’s house. My dad had mercifully taken the week off to help me if I needed anything, and he said the nicest thing anyone has ever said to me, “Let me take Kasey for you.” Um, let me think about that for a second- OK! 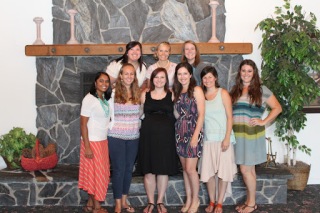 That day finished the final break down of my perceived control over my life. I found myself with a friend folding laundry in my living room, while my aunt arrived to stay with my children for the three days we would be in the hospital. Letting people in to help you is a task in and of itself, it’s not easy admitting you can’t handle it all. If I can take just a moment to recommend finding a tribe of people who are in your corner, everyone needs one. There’s something about letting your friend fold your husband’s underwear that really cements a friendship.
Thursday morning dawned, overcast with a chance of rain, my favorite kind of weather which felt promising. Franz and I snuck out of the house at 5:30 and drove to the hospital. My mom, my grandparents, the doctor and the added surprise of a friend as my main nurse greeted us in the room. In such a short amount of time, I was there, with Franz by my head, that blue curtain inches from my face, waiting for that first cry. It came, and my heart turned over in love for this as yet unseen daughter. Franz had the first time honor of cutting an umbilical cord, and then they placed her on my chest. I had never experienced that with our boys, the hospital hadn’t allowed it for a c section before, and it felt amazing. She was so soft. Franz and I stared at this tiny perfect thing, and I knew we were going to be alright. I felt hope, as I held our Hope. We could do this. She was ours, and we were hers. 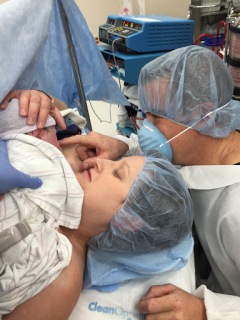 We didn’t get the adorable first family photo in the hospital, by the time she came all three boys were sick with Hand Foot and Mouth and my poor aunt was dealing with the delightful job of taking care of them. Sliding through vomit in our bathroom floor wasn’t exactly what she had signed up for, but she has a marvelous sense of humor.
The day we brought this novelty of a sister home, we were met in the driveway by brothers who could hardly contain themselves. I cringed as they touched her with their poor little marked hands, but I didn’t stop them. If she was going to get sick, I had no control over it. Growth! 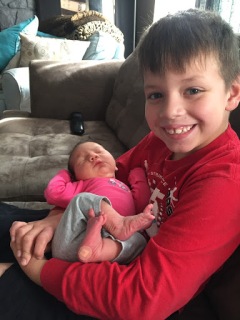 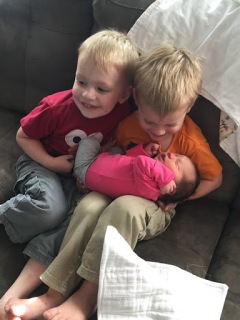 In the course of this year she has been dropped, squeezed, kissed, squished, stifled and carted around the house like a doll. And she has loved every blessed second of it. I’ve loved every blessed second of it. Well, nearly every second. I lost my cool when I found Kasey standing in her crib with her, and then again when he dropped her…why is it always Kasey? Hmm, a thought to ponder.
This morning as I sat in my living room with her pulling at my pj pants, one twin sick on the couch and the other bouncing off the walls, I stared at my coffee mug and smiled. It is a remnant from my baby shower, and a delightful reminder.

The day Hope came to stay, she brought with her an ever-present reminder of the hope I have in the One who gave her to me. My favorite verse makes me chuckle at the irony now. Jeremiah 29:11
“For I know the plans I have for you, declares the Lord. Plans to prosper you and not to harm you, plans to give you hope and a future.”
I wonder if God laughed to himself the day I hung that over our front door.
He did indeed give us Hope. 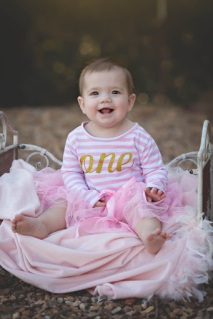 One thought on “When Hope Came”